Got rust? Trying to prevent rust? You've got choices. 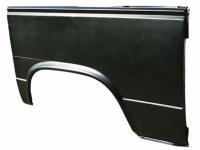 Bus Depot Replacement Metal: If you've got body damage, or rust that is too far gone to treat, nothing solves it better than cutting it out and starting fresh. We offer the best fitting metal from the best European brands. Click below for diagrams and information....

Email if you can't find what you need

All rustproofing and rust conversion products work off of the same principle, which is that rust can't form or grow without air and moisture, so they form a barrier of some sort. The difference is whether they're intended to be applied to rust-free metal (either because it never rusted, or because all rust has been removed), or can also be used on metal that is already rusty to stop that rust. Rustproofing and undercoatings fit into the former category. The idea is to seal the finished or painted metal that's still in good shape so the rust won't start to begin with. However, most eventually fail because they're not flexible enough. As the surface flexes during normal use (even a little bit) the coating eventually cracks or peels, leaving your Volkswagen unprotected.

Since 1972 Waxoyl has been the go-to in England among classic car enthusiasts who restore old Mini's, MG's, and Triumphs, which start to rust at the very sight of rain - an unfortunate tendency given Britain's notoriously wet weather! True to its name, Waxoyl dries leaving a waxy protective coating that does an amazing job at repelling water, and stays flexible so it won't crack or peel. It's so effective that it's also used on critical structures like bridges. Waxoyl is great for use on chassis and suspension parts, and can either be painted on, or sprayed into cavities and onto parts where it's not practical to use a brush. (As per the instructions, heat it first by putting the can in hot water, this will thin it out a bit for easier application.) The same company makes a flexible undercoating containing Waxoyl,which is well suited for undercarriages and other areas where you want the protection of Waxoyl but not necessarily the waxy surface. Both products run circles around most U.S. rust preventatives. We also offer a flexible seam sealer which can be applied to body panel seams to protect against rust formation - especially useful on Vanagons, which are notorious for seam rust. If you don't have rust yet in crucial areas like your undercarriage, chassis, and seams, this is your chance to keep it that way. Preventing rust is way more effective, cheaper, and easier than treating it.

Rust Converters can literally be painted right over rust - in fact they work best that way. (If you didn't have any rust or had removed it all, you could use a rustproofing product, see above.) They work by encapsulating the rust to prevent air and humidity from reaching it, so the rust can't spread. This approach can be useful for areas that aren't bad enough yet to warrant welding in new metal, or to slow the rust down until you have the time and/or funds for a permanent fix. If you use a top tier rust converter like POR15 or ZeroRust, you can get years out of one treatment. Both products are rated at 2000 hours using the industry standard ASTM B117 salt/spray test, which simulates long-term exposure. To put that in perspective, conventionally primed/painted steel starts to rust in as little as 96 hours under the same test (!!!) and even professional industrial strength two-part epoxy primer (which is expensive, hard to use, and can't be applied over rust) lasts only 1500-1800 hours.

ZeroRust is the easier of the two to apply, because it doesn't require as much prep and handles like conventional paint. You remove any loose rust (not all rust), clean the surface, and either spray it or brush it on, Because it's available in a spray can (unlike POR15), it's ideal for getting into cavities and tight corners that would be hard to prep more thoroughly or reach with a brush. (Every VW owner should have a spray can just to spray into areas that moisture can get into, to keep rust at bay.) But it's also well suited for larger areas such as chassis components, floorboards, etc. For those uses you can buy a quart and just brush it on like paint. You can save the rest for future use, since ZeroRust stores easily just like paint. (By comparison, POR15 cures quickly once opened, making it difficult to store.) We sell ZeroRust in black because it is their most effective color.

POR15 is the granddaddy of the category and still one of the very best. It chemically bonds to the rust like an epoxy, creating a very hard protective layer. A major advantage of POR15 is that it's available in a clear formulation that's just as effective as its pigmented ones. This makes it ideal for visible areas like fenders, body panels, seams, etc. because if you overrun it slightly onto the paint you'll barely be able to tell. (ZeroRust also offers a clear formulation but it's not as effective as their black one.) POR15 does take a bit more prep than ZeroRust. While it too can be painted over rust, it needs a very clean surface to bond to since it is more epoxy like. First remove any loose rust with course sandpaper or a wire brush. Then use a degreaser to make sure the surface is grease-free. Then the manufacturer also recommends prepping surfaces with their Metal Ready etcher, especially if treating unrusted or painted areas. (You can use other prep products that contain phosphoric acid and zinc phosphate if you don't want to use their own version.) The brush the POR15 on. We sell the clear version in quarts. We also sell an inexpensive $24.95 Starter Kit that includes all of the prep products (degreaser, etcher, even rubber gloves) as wall as enough POR to cover 6-12 square feet. However that kit only comes with black POR15. You can paint over POR-15 when dry, apply primer over it while it's still tacky, or just let it cure and not finish it at all. POR15 does not store easily when opened as it cures quickly, so do not store unused POR15 in the can. The best way to store it is to find an airtight jar small enough to fill it to the very top so little air is inside the jar. Also, because it cures so quickly, it cannot be purchased in spray cans.

A good strategy is to use ZeroRust spray cans in cavities that you can't reach with a brush ... a ZeroRust quart in non-visible areas like under the vehicle, inside wheel wells etc. ... and clear POR15 for painted exterior or interior areas. For good measure, you can then apply Waxoyl rustproofing or Waxoyl undercoating. And of course, cut out and replace any metal that is too far gone to save.